Navasota had a Cover Girl!

Another Texas woman who has not only been forgotten to history but robbed of her origins is Adelaide Prince. From Millican, Texas, she became one of the leading ladies of the stage, touring all over the United States and England. But her legacy has had no resting place, and that is much her own fault. 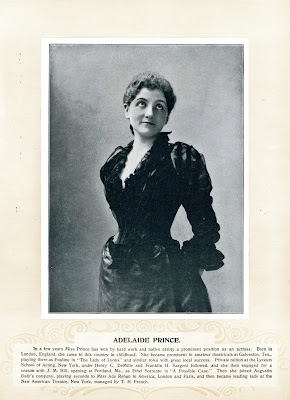 Born to a family of Jewish immigrants around 1868, the home folk in Navasota knew her as Lena Rubinstien. According to Maureen Chinski, fellow Jewess and the author of The Navasota Bluebonnet, (published in 1954) young Lena moved to the Navasota area when young and attended private schools there, where she grew into a “great beauty” and showed dramatic skill early. By age nineteen she was married to Harry Prince, a Galveston showman who gave her a stage name and a start in show business.

But soon little “Len” from Millican had left him and her children for fame and fortune in the east, where she fell under the spell of Creston Clarke of the famed Booth acting dynasty, whom she married and starred with in many productions. Later Rubinstien/Prince became one of the first actresses to attempt the difficult transition from the stage to the Silent Screen. She is credited with at least three early films.

Perhaps embarrassed by her lack of motherly responsibility, she shed old associations in Texas and assumed a new life with her new career, and as this handbill reveals, she claimed to her fans that she was born in England. This could be true, but if it is, she must have come over to America as an infant. She actually came back to Navasota in 1890, where she and her company put on a one-night show; The Last of His Kind. It is presumed she had come to Navasota to see her children, who were still young and might well have been farmed out to their grandparents. [An anonymous blog commenter has offered that both of her children lived long lives, and son Harry became a successful writer in California, actually writing at least one screenplay.]

Her true hometown of Millican, Texas was never exposed, and she died in exile. By then her relations back home had probably given up on her, and there was no blood-kin to mourn her passing. Had not Maureen Chinski casually mentioned her in a paragraph in her book, which she never lived to see published, we would have never known about this amazing story… begging to be told. 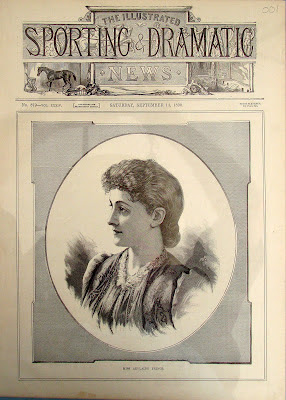 Since discovering Lena in the Chinski account, I have found several wonderful relics of her career, floating around the Internet, such as tobacco cards, magazine covers, and the advertisement at the top, which quite clearly illustrates her flamboyant tendencies. Adelaide Prince was never a big star, but certainly a worthy member of the incredible "Residents of Navasota and the Surrounding Area Hall of Fame":