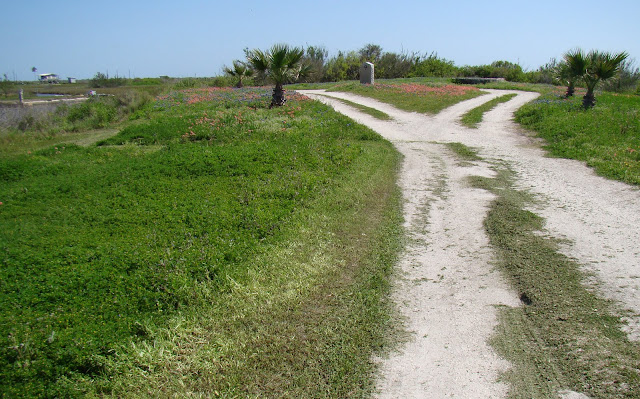 As far as towns in Texas were concerned, this one had an extra rough go of it. Few towns in the Lone Star State have hosted so many significant dramas- to just end up a memory on a historical marker.

Indianola has had several names, and is famous for several things, and yet there is almost nothing left of the original town site. Originally known as Indian Point, it is believed to be the site where the French explorer Robert Cavelier Sieur de La Salle first landed on Texas soil in 1685 during his disastrous incursion into Texas. Later it was an important port for early Texas, the terminus of the Old Goliad Road, which ultimately led to San Antonio.

This was where German entrepreneur Prince Karl of Solms-Braunfels landed his first 400 brave emigrants to settle in Texas, in 1845. He named the village Karlshafen. This was their first home before moving on to the Guadalupe River ( present day New Braunfels ) and farther inland to Fredericksburg. Soon over 4000 more Germans arrived at Karlshafen, pushing the limits of the little Texas seaport. Unfortunately, the War with Mexico utilized every available wagon in Texas, and this meant overland transport of so many emigrants would be reduced to a veritable trail of tears on foot. Before they could be thinned out and taken inland to join their kinsmen, a terrible epidemic broke out at Karlshafen and many became very ill and over 800 German immigrants perished. Prince Karl came to be perceived as a sort of pariah, the land promoter who failed to keep his promises and provide homes to his immigrants. This may be the reason why locals elected to change the name of the fledgling port.

The U.S. Government landed a herd of 75 Army camels at Indianola before the Civil War. The Secretary of Defense, Jefferson Davis, thought they might be useful to conquer the West. This was not the worst or the last mistake he ever made. Across the bay was Matagorda, which became a serious rival to Indianola's development. 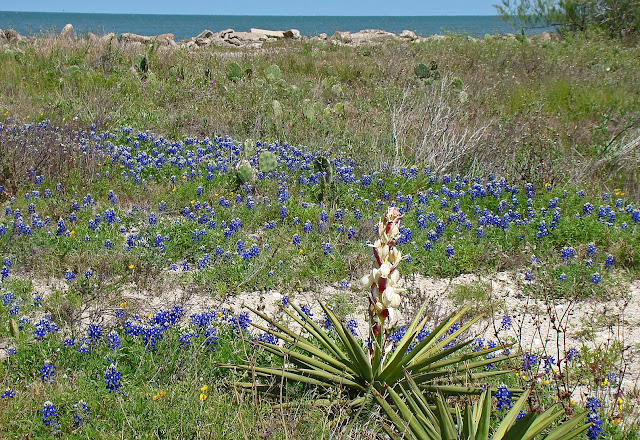 Fitting ground cover to symbolize Indianola's colorful and prickly past.

During the Civil War, Indianola was considered a geographically strategic spot, and Federal ships made blockades there to prevent shipping of Texas cotton to Mexico or Europe. This was intended to shut down the Texas economy, and thus hurt the Southern cause. There were some skirmishes in the region, but while the Rebs successfully repelled the Yankees at nearby Lavaca, at Indianola the Confederates were finally driven away, and the Union army occupied the area during the last years of the war. This is one of the few places in Texas where the Yankees took and kept control until the Confederate surrender... Perhaps the Texans found the Yankee occupation of Indianola a sort of a fitting punishment. When the Union forces finally left, the town of Indianola was in shambles. Around one-third of Indianola had been destroyed or cannibalized. Any personal belongings of its inhabitants (who had fled ) were gone as well.

BUT Indianola, like many coastal meccas, had an iron backbone and rebuilt.  It became one of the busiest ports in Texas next to Galveston.

The end of the Taylor-Sutton Feud:

After a bloody series of gunfights all over Texas,  DeWitt County Deputy Sheriff William Sutton and his allies had killed a number of Taylors and their friends, and tired of the bloodbath,  Sutton fled to the ends of the earth to find sanctuary. That place in his estimation was Indianola... He and a partner were supposedly planning to meet their cattle herd already marching to Kansas, via the Mississippi and Kansas City. Traveling with their wives, no doubt they enjoyed a few fresh oysters while there... but in March of 1874 the Taylors, quite possibly led by the notorious gunslinger John Wesley Hardin,  tracked him down... found them waiting to embark on the first steamboat out of Texas...and made Billy Sutton and Gabriel Slaughter, (ironic?) his traveling partner, two of the EIGHTY THREE MEN KILLED IN THE DEADLIEST FEUD IN THE WEST,  and made Indianola the end of the trail... once again.

THEN, The trial of Sutton's murderers drew a huge audience- which was unaware of this incredible Indianola curse...

The Indians, Yankees, gunslingers and diseases were bad, but were nothing compared to what came next. As hundreds flocked in to witness the prosecution of some of the last of  the Taylor clan, a storm began to brew.. a real storm... And the little coastal outpost was almost destroyed by a hurricane on September 15, 1875, killing as many as 300 hundred people... and Billy Taylor, one of the assassins who killed William Sutton, managed to escape during all of the chaos during the storm... weeks later the new leader of the Sutton faction was murdered...

And then Indianola was wiped out completely by another hurricane in 1886. 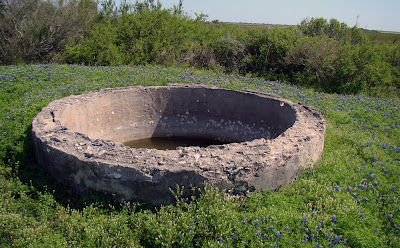 Today, all that can be detected of the original town is an oyster-shell concrete cistern. Fresh water was trapped from rains into this primitive concrete tank... and it still holds water. The bluebonnets stand proudly and wave in the brutal coastal breeze as if to say, "brave Texans toiled here." 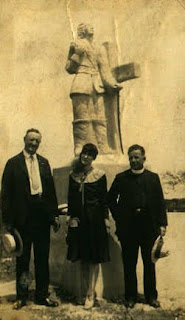 I once met a lady whose mother, Nora Currie Sweetland had sculpted a statue of La Salle back in the thirties. She said it had been placed at Indianola and wondered what had happened to it. 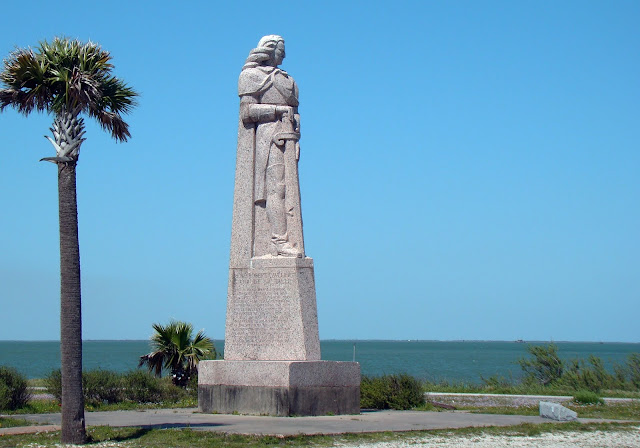 Nearby a giant granite statue of Robert Sieur de La Salle looms over the lapping waters of Matagorda Bay, but it is of much later artistry. La Salle's "Ft. St. Louis" was a few miles inland from Indianola, but was attacked and destroyed by Karankowa Indians while he was on his way to find help on the upper Mississippi. There are two more statues in Navasota of the ill-fated French explorer, ( near College Station), where La Salle is believed to have been murdered by his men. Artifacts from his expedition can be seen at Bay City. 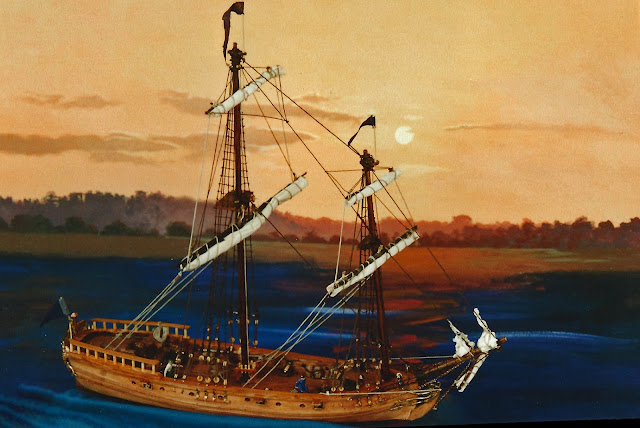 My friend Joe Babcock carved this faithful replica of La Salle's ship La Belle, which has been found and excavated in Matagorda Bay. 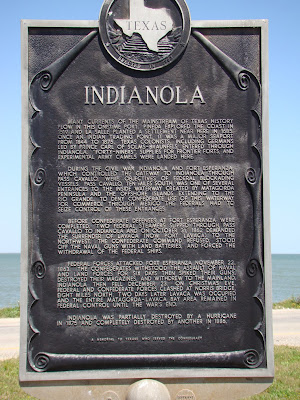 In 1963, Texans placed this marker as a memorial to the role of the Confederacy at Indianola. 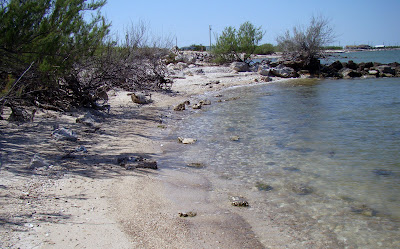 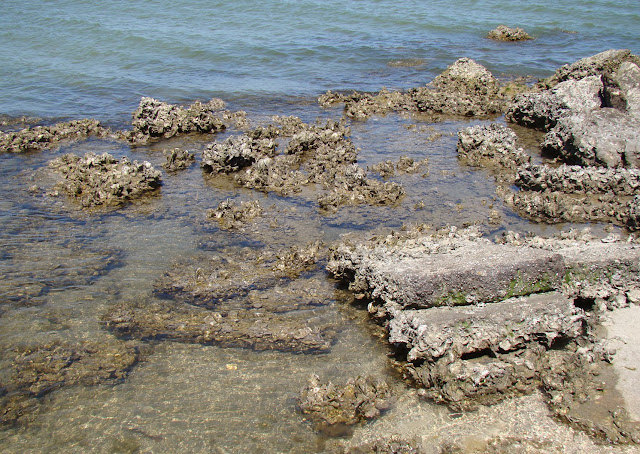 As a youngster, I learned the treachery of Matagorda Bay by trying to water ski on its waters. Each time I went down, chunks of flesh were knocked off of my shins by the infinite formations of oyster reefs below the surface. They would have easily destroyed a small ship like La Salle's with a little help from the coastal breezes.

My lady friend would have been disappointed to know her mother's statue had been wrecked by a another hurricane (Carla?) many years ago. The base can still be found at the local cemetery. It too fell victim to the curse that swallowed La Salle and most of his ships and his hapless French colony, as well as hundreds of German emigrants and eventually... a whole town. 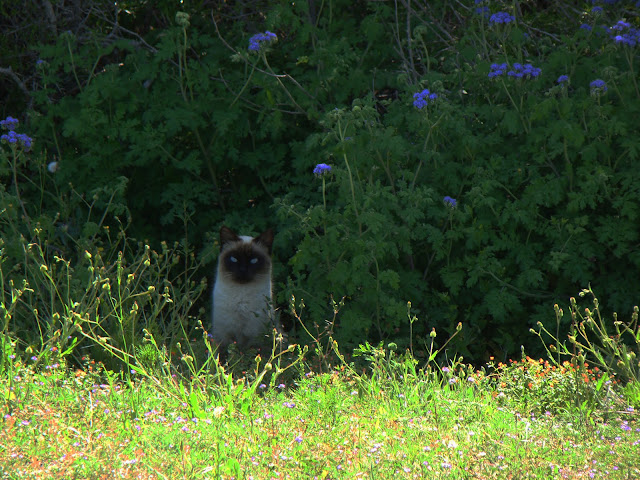 A wild cat hiding in the shrubs is the only creature that calls the old townsite home. I imagined if reincarnation were true, it was La Salle himself, watching vainly over the place where his hopes and vision once lived. I threw the cat a piece of my turkey sandwich and he stared with a cold stare of royalty, as if food meant nothing to him... and I left Indianola, which seems to be the door of several curses in Texas history. 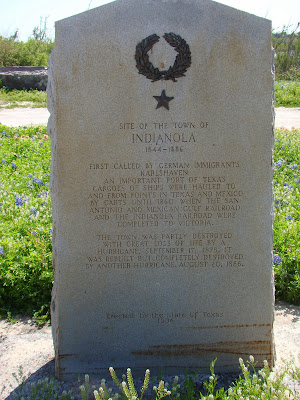 A stone marker erected in 1936 to remember Indianola.
Posted by Russell Cushman at 11:05 PM