NOTE: you can read this and the whole series on my pages for Texas stoneware. Just look over to the right at the list inside the green box, and go down to the last four entries... all about Texas stoneware! And leave me a note! What do YOU know? 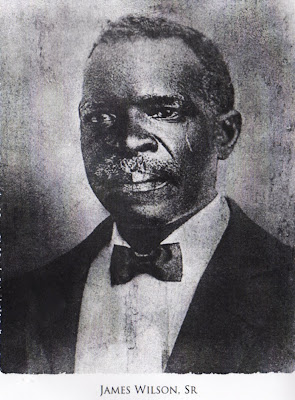 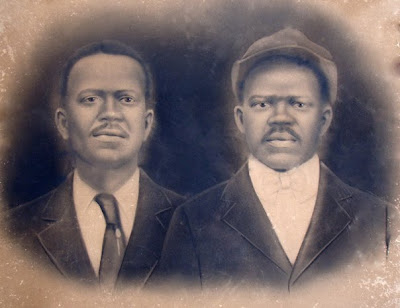 It says in the Bible that God is like a potter, and we are like the clay. So potters have always had a certain importance to us, as they illustrate attributes of our Creator. These guys were once slaves, shaping pots on the potter's wheel in Capote, Texas, near Seguin, for their master, John Wilson, a Presbyterian minister. When they were freed, they started their own business, making pots with their brother Hiram for their community. Also working in the family enterprise were Andrew and George Wilson. Still, it was the oldest brother's name, H. Wilson, that was stamped on every vessel. The following is a little information I have scavenged about this intriguing Texas family. But what I am most excited about is the epiphany of this photo, believed to be of the less known Wilson potters, now on display at our blues museum at Blues Alley...

When Texas stoneware collectors gather and converse around pick-up truck beds at flea-market parking lots, there are a few names that always come up. Names like St. Clair, Helberg, Jones, Ross or Russell, all infamous traffickers of this rare collectible. They are the envy of a small elite school of stoneware enthusiasts, as they find the elusive grails of Texas lore. And Wilson stoneware is the most famous and best documented, and thus the most sought after early Texas pottery.

Only a few years ago, just a small specialized group of Texana enthusiasts even knew of the obscure cluster of potteries in Guadalupe County. A protégé of stoneware collector and author Georgiana Greer, young Craig Oatmann blazed the trail as he scavenged through forgotten and abandoned pottery sites to find scraps of Wilson pottery to aid in identification.

I was introduced to Texas stoneware through an old friend, now deceased, who insisted that I “fix” his broken and chipped pots so that he might enjoy them better. Stuart Cox harangued me until I finally fixed a few, adding handles, patching glazes, even reconstructing spouts and some bottoms. It did not take long however for the word to get out, and I "fixed" several vessels for other collectors, to the howls of protest from purists who hated the very idea of restoration. I was able to restore many pieces for collectors back in the late 90’s, before I just got too busy to fool with them. In the process I fell in love with the stuff, and soon could recognize early Texas potters by just looking at the pottery. Most of it is not signed, and it takes expert knowledge to discriminate between some potters, and even they are fooled and surprised sometimes.

As rare, early Texas stoneware has become a coveted thing, it has also become the subject of various unorganized educational efforts. With trickles of information, and a few publishing ventures of Russell Barnes, Dale Ross and others, now Texans can know a tantalizing portion of the Wilson stoneware legacy. The first point of note is there were three “sites.”

First Site Wilson: The first site was established in 1857 by John MacKamie Wilson, a Presbyterian minister and entrepreneur. Wilson promoted the central Texas region where he settled, and wrote glowing reports about the suitable clays that were found in the area for the manufacture of stoneware. His pottery was made by his slaves, including Hiram, Wallace and James Wilson. Production in this pottery must have ended shortly after the Civil War.

The short number of years of production under John Wilson limited the amount of artistic variation, and there is a fairly strong coherence of artistic style in these forms. Vessels made here were quite ovoid, and usually glazed with alkaline substances or salt, which created smooth, clear to inconsistently colorful and somewhat crusty glazes. First Site forms include mostly slope necked jugs, small-mouthed jars and churns. Handles on jugs were high and open, joined completely to the vessel shoulder. Handles (grips) on jars were horseshoe shaped and tapered on the ends. 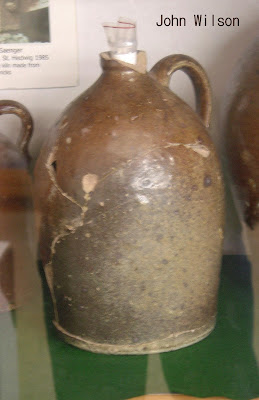 An example of John Wilson's stoneware, on display at UT San Antonio.

Second Site: John Wilson’s slaves, members of the black Wilson family who had worked on the Wilson Plantation, started their own pottery at a different site soon after the war. Throwing and firing begun around 1869, as Hiram, James and Wallace Wilson made a team of potters that are believed to be one of the very first businesses in Texas owned and operated by freedman. Hiram was apparently the boss, and the primary force in the enterprise, as his name was stamped boldly on much of their stoneware produced from the end of the Civil war until 1884, when the legendary potter passed away. 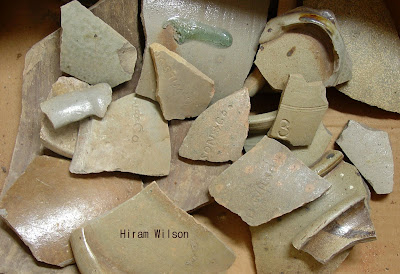 Shards found by archeologists at the Hiram Wilson "Second Site." Note:You can click inside the photo and it will come up MUCH larger.

Vessels made here were ovoid to slightly ovoid, glazed with salt and various mixtures of wood ash, which resulted in unpredictable, runny, transparent, grey-green finishes. Flashes of iron present in the materials made beautiful crimson swirls and spattering, which appear randomly on the vessels. Forms from the second site are usually small and large-mouthed storage jars, churns and jugs. Side handles on crocks and jars are typically a no-frill horseshoe-shaped coil. Most importantly, the vessels are marked, with the prominent stamp in plain letters: H. Wilson & Co.

Third Site: At the same time that the former slaves began to throw pottery as free men, John Wilson conveyed one of his other pottery sites to M. J. Durham. Durham produced stoneware there and was later joined by a partner, a black potter named Chandler. It is known that Isaac Suttles began his pottery career here. Wallace and James Wilson joined this operation in 1884 after the death of Hiram Wilson. This pottery was in continuous production until 1903.

Third site vessels are greatly varied stylistically and are much more cylindrical, salt-glazed, and light grey to beige in color. Many flaws in the clay body became evident in the firing, and surfaces were crude and splotchy. Forms discovered today may be very similar to later Suttles pottery, since I. Suttles worked there after arriving in Texas from the Ohio valley. Jugs might have fancy cavetto, blob top, flattened ring, or refined napkin ring spouts. Handles usually start on the shoulder and end at the spout of the vessel, reducing breakage. Shipping by rail caused an evolution of the forms over the years from ovoid to straight sided, to decrease wasted space in crating. Third Site pottery is thick, sturdy and more utilitarian. 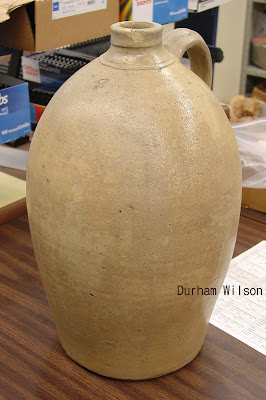 Jug attributed to the Durham-Wilson pottery, from UT San Antonio.

Note: The photo of the two men at the top was purchased from an antique shop here in Navasota, and was thought to be two of the Wilson brothers... The man on the left could easily be a brother to Hiram Wilson, the famous black potter, and another artist saw a striking resemblance between the man on the right and James Wilson. I concurred and offer it and a rare published photograph of James Wilson to the general public for viewing and comparison. We have no proof of these men's identities, but are still pleased and thrilled at the possibilities.

Also look for my new series of articles about Texas Stoneware, searching my "Pages" section at the top right of the main page! Parts I & II have this and much more information on Texas stoneware!
Posted by Russell Cushman at 10:48 AM

Where did you get these pictures from? James is my great grandfather and that is not him.

If james is really your grandfather, please elaborate. I am trying to connect a few family dots.

My wife is one of the Wilson's daughters!!!

FYI. The photo at the top of the post IS James Wilson. It is the same one used at our family reunions.

Hiram was my great grandfather , I am a member of capote Baptist church which was founded by him

I'm having a hard time finding your other Texas pottery articles but I'd love to read them! Can you give me a title?

Alfred- Thanks for your interest, contact me by email and we can arrange to send you a flash drive of my articles.. most of which were retired with intentions of re-doing them...