Le Doc wants to AX you a question... 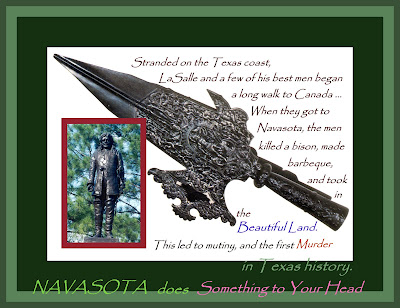 We’re talking about Navasota Doctors. It seems that our wonderful Grimes County doctors have been so taken for granted that there is not much published about them in our local histories. The little that has been written is sketchy and misleading, and in researching this blog, I became quite glad someone was finally getting the gist of it. This is by no means a complete history, but perhaps the beginning of one… And believe it or not, it is very interesting!

Let’s go back as far as we have any record. That would be 1687 when the official Surgeon with Rene Robert Cavalier Sieur de La Salle arrived with the ill-fated colonists at Matagorda Bay. His name was Liotot, and he has the distinction of committing the first recorded murders by Europeans... on Europeans in Texas.

Financed by the French Crown, Dr. Liotot was eventually caught up in a conspiracy to kill their intrepid leader, the famous French explorer, and in the process he became one of France’s most infamous mutineers, and our first Texas mass murderer. La Salle was now headed for Canada, leading around seventeen men on a trek across the Midwest in search for help for his ailing colony on the Texas Coast. Liotot and Duhaut and their party had been sent to retrieve some buffalo meat cached in a tree trunk somewhere near the mouth of a River, probably the Navasota, while La Salle visited an Indian village in Grimes County. The meat had been hidden to help supply this loosely planned, desperate march back to French held lands on the Mississippi, but it was rancid so someone did the sensible thing and killed some more buffaloes.

The hungry hunters began to feast on the fresh beef, forgetting La Salle and his advance party who were hungrily waiting on them. Finally, after filling themselves, they sent a messenger to tell La Salle to send some horses to help them pack the meat back to the advance camp. While awaiting transport, a conspiracy congealed between the surgeon Liotot, Duhaut, L'Archeveque, Tessier and a German mercenary named Heims. Duhaut was resentful that La Salle had confiscated his quantity of trade goods after the French colony ran on to hard times. La Salle was now in his debt, but he doubted that he would ever live to see compensation. Lt. Moranger was La Salle's nephew, and a bully whom they blamed for several previous mishaps, including the death of Duhaut's brother. La Salle's kinsmen on the trek, Abbe Jean and Moranger, nobles with status in French society, would no doubt seek revenge if not prosecution... for any violence done to La Salle or others...

Rested and with their bellies full, the malcontents made their short list. Intuitively, La Salle already had his suspicions, and asked his captain Joutel if he had sniffed any ill-winds... Joutel only reassured him that all was well, as far as he knew...

Thrilled at the news of fresh meat, La Salle sent his servant Saget and his faithful Shawnee guide Nika, led by his trusted emissary, his nephew Moranger, who found the the hunters and immediately took charge. Little could the boorish Moranger have suspected that his authority was resented and that the disgruntled men had decided not to suffer his arrogance anymore. That night Liotot picked up a hatchet and repeatedly whacked  Moranger, then Saget, and lastly Nika, for good measure. An innocent bystander was then required to finish off Moranger who was still conscious, thus making him complicit in the murders. This action found approval with this committed handful of conspirators, who knew instinctively now that they must kill La Salle in order to avoid prosecution. Afraid to return to La Salle's camp, they sat back and ate more buffalo... and planned their next move.

Soon La Salle came looking for them, and caught up with his renegade party near the fork of the Brazos and the Navasota Rivers, and was immediately shot dead by Duhaut who was waiting along the trail for him. The exact location is not known, but certainly within walking distance from the known Indian trade route later known as La Bahia Trail (FM 105 or HWY 90). Known as a reliable caregiver to the struggling colony in the past,  Liotot was a willing witness to La Salle's murder, and even tauntingly helped strip his body and toss it in the reeds to feed the vultures. Later he and Duhaut were fittingly killed in a shootout with the German Lutheran Heims and a Breton deserter named Ruter, after a quarrel ensued over the spoils of the mutiny. After being allowed to make confession using is last breath, Ruter put the bleeding Liotot out of his misery. This was something, he argued, that they had certainly never allowed their victims. But alas, "The deed was done."

This is the wilderness adventure that must have inspired the TV reality show “Survivor.”

Many of the Frenchmen joined up with the Indians, but some including Captain Joutel and a priest found the way to the Mississippi River and a French fort which La Salle had built on an earlier expedition, living to tell the sordid tale that one day would put Navasota on the map. Who knows, if Dr. Liotot had refused to join the assassination plot, perhaps La Salle and the others may have been spared... and then Navasota would be less two monuments, and a lot of attention and tourism!

Thank goodness, that saga is the last mention of a treacherous, bloodthirsty surgeon killing the very people he was hired to save. Since then, Navasota has been blessed with an impressive list of physicians, some of whom came while Texas was still just a Mexican State.

These pioneer doctors risked it all and saved countless lives over the first fifty years of Texas History.

Next time on the Navasota Current…
Posted by Russell Cushman at 9:46 PM