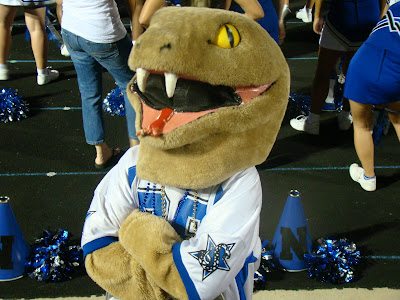 The Navasota Rattlers did it again Friday night, shutting down and shutting out the Taylor Ducks 44-0, once again proving that on a good night, they are the best High School football team in Texas. I have missed the last two games, one of which was a strange incident in Caldwell where a team of imposters showed up, passing themselves off as the Rattlers and proceeding to get spanked 14-0. Then the next week the Rattlers were able to fill their uniforms once again and handily upset 5th ranked Rockdale, thus saving their hopes of making it to the playoffs. Let's hope they can keep those posers out of the dressing room from now on.

Navasota fans had to drive almost all the way to the I-35 Corridor to enjoy their latest massacre, as the Rattlers blew the hapless Ducks out of the water. That drive turned out to be the hardest drive of the game...

Once Again Navasota QB Kye Hildreath ran, yippee kye eye yeh, passed and punted his way into Navasota football history, making winning almost boring... but many fans sat through the cold till the bitter end, not wanting to miss any of his displays of athletic prowess. Poor Taylor seemed to be unable to score against our brutal Defense, even when handed ideal field position by the refs.

All in all, it was a more messy game than those I have seen this year, with a few too many unnecessary penalties, especially since they were never even threatened by Taylor. It was good to see some of the second string get to play, and our Band, Diamonettes, Mascot and Cheerleaders all looked great, and made everyone feel the drive was well worth it, even if the game was one sided, as several have been.

Looking across the field at the sparsely distributed Taylor fans, evacuating fairly early in the game, scoreless and sad, it reminded me of a tirade I got on about Hearne earlier in the season... The little town of Taylor has so much going for it, like Hearne, good geography and natural beauty.. but very little School PRIDE. Fair weather fans are so missing the point. We'll never be Hearne, and never be Taylor either! Let's all agree, that if and when we ever have a not-so-strong season as we have enjoyed the past few years, lets always be loyal to and proud of our kids, and show it, no matter what! Next week: Cameron!
Posted by Russell Cushman at 1:21 AM

To the Friday Night glee and those who lost jobs,
Can we be so happy for a night that will be forgotten and still forget all who lost their chance to work. They may not have lights or food in their homes because their income has been cut. In my small part of trying to make Navasota a better place, it cost two jobs for the night. Extend that to how many others and can you truly be that excited about a game.