The King of Cowgirls: Lucyle Richards and her lost loves. 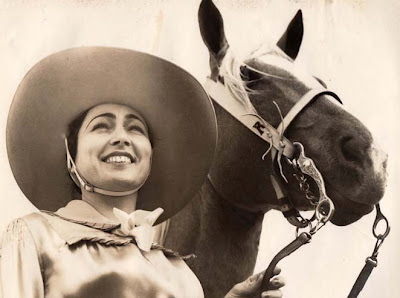 One of the most outstanding purchases I made at the recent Burley Auction in New Braunfels was a collection of photographs and newspaper clippings… evidently belonging to the legendary Lucyle Richards-Roberts.

This collection had been offered on a couple of Internet auctions and apparently never found a home, and when I saw the remnants of her own personal scrapbook, spread out like miscellany, I also saw important historic artifacts being offered to an audience unable to appreciate the items in front of them. I felt impulsively that I had to bring the last vestiges of her life home and find a suitable venue for them. Somebody needs to write a screenplay about this iconoclast who was not only ahead of her time, but she was unique in human history. Understand, I knew nothing about her… but soon realized what a catch I had made… and began to be mesmerized by this amazing human being. Not unlike the seventeen husbands she netted during her stunning life. 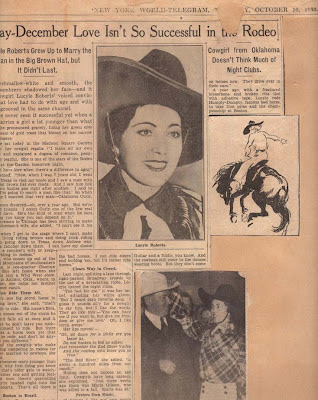 Lucyle had to learn to laugh off her abundance of marriages and divorces... and the Media seemed to laugh along with her.

In the pile of stuff was a clipping from the Ft. Worth Star-Telegram, with an article about the love her life, the man who taught her to fly, T. J. Richards, her (first?) husband who was killed in a plane crash near Dallas while training an Army Air Corpsman, during WWII. A rodeo performer himself, Richards was a real deal cowboy, and succumbed to Lucyle’s pitch for a trade, where she would teach him to trick ride, if he would teach her to fly. Richards soon bailed out from the deal, when he saw how daring she was, saying she would never make a good pilot. She later proved otherwise, and showed him a thing or two, but he never became a trick rider because his life was cut short while serving our Country. 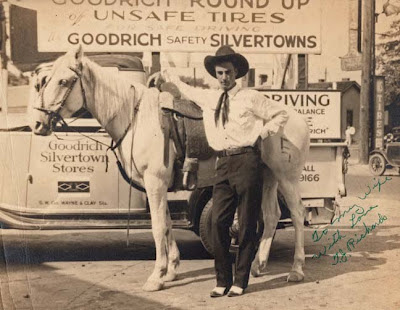 Tall and rawhide tough, T. J. Richards was probably a real keeper as well, and perhaps the only man that could have ever made Lucyle happy or domesticated her, but we will never know.

Lucyle certainly looked hard trying to replace him, or perhaps his memory, but never found another one like him. In fact her luck was terrible and she actually had to shoot and kill one of them, in self defense. Charges were not even filed, and Lucyle Richards Roberts lived the life of a Western Star and eventually became an icon of the American West. 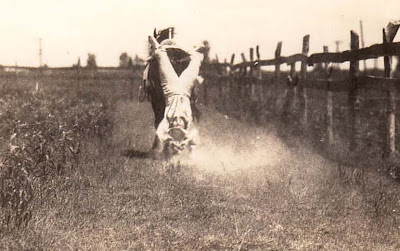 Of course, I would love to have had the chance to ask Lucyle some questions... like "How did you keep your hat from falling off?"


Lucyle had to have set or broken numerous records for female rodeo performers, if not number of marriages. She was training riders and horses into her old age, claiming she would probably not quit until some horse killed her. When asked if she had the chance, would she do all over again, she replied, “I’d probably just do more of it!” She was inducted into the Cowgirl Hall of Fame in 1987 and passed away, full of vinegar at a ripe old age of 86 in 1995. Even today, Lucyle Richards has few imitators or equals.

So in this time of national tragedy, I thought it was a good time to introduce you to a couple of true American Heroes.

Posted by Russell Cushman at 11:24 PM

Where did you find these? She is my grandmother and I am always looking for stuff of hers. I found some stuff that was up for auction but the auction had passed and they weren't sold. I contacted the seller telling him who I was and he doubled the starting price of the items for me to purchase them.
Alot of her stuff got stolen out out of her home in Brownwood when she had to be put in the nursing home. I am always searching her name on the web to see what might come up.

I always seem to catch these auctions after they are done.

Lucyle Richards and her daughter were friends of mine.
she is really missed.

Lucyle (Garner) Richards is my wife's 1st cousin. Where did you get that she was married 17 times? Also, do you know where she is buried?

I learned what I wrote here from the materials I purchased and it is all backed up by research from many sources. With such an outlandish fact, one can never be too careful. Lucyle was certainly never secretive about her marital history. But as a writer I have learned that families did not talk about such things and relatives were often the last to know... I may have that info... but do not know off-hand where she was buried.

She wasn't buried. She was cremated.

I am collecting the history of Fort Bend County in Texas. The Dew family started the Houston Fat Stock show that later added the rodeo. Frank Y. Dew was the husband of Lucyle that she shot. I have the INQUEST PROCEEDINGS posted at http://lifeonthebrazosriver.com/Dew,Frank.pdf
This record shows issues with Lucyle not being charged. My understanding is her lawyer was the young Percy Foreman that got her acquitted. I would be interested in any information you may have on family.

I purchased Lucyles rodeo estate soon after she died from a relative it filled a good size van. I first met Lucyle in Brownwood Texas right after their record flood. She showed me two trunks of photos and memories she had kept everything. One of the trunks had got caught up in the flood and was soaked I recommended she try Texas A&M they might be able to help. Soon after she enter a home I was able to keep in touch with the family for the next five years until she died. To correct some statements, her first husband was Roberts better known as Oklahoma Curly in the field of rodeo he was several years older and the marriage didn't last very long. She married T. J. Richards and divorced him before he was killed in airplane accident. I still have several small pieces and a few photos left. A movie should be made next. Indtex

I purchased Lucyles rodeo estate from a relative soon after she died it filled a good size van. I sold most of it over several years at the Canton First Monday Market still have some great photos and some smalls. Still pull it out every so often and spend an hour or so looking through it. Her first husband was Roberts better know in the field of rodeo as Oklahoma Curly they were not married long he was several years older. She then married T.J. Richards in 1935 was divorced before he was killed in air accident. She lost her license to fly after she wrecked he new plane at the Beaumont airport in front of a federal officer he tor her license up on the spot she was later reinstated. What a life she led a movie is a must. IndBob

IndBob, Do you still have any of it left? I would be interested.
Chuck