And then there were chain killings... 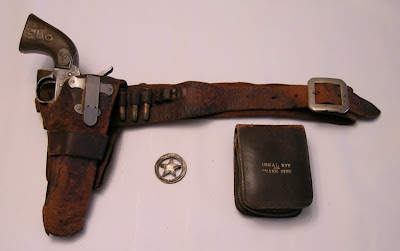 Tools of the lawman's trade...

After Reconstruction, the Texas Rangers reorganized in the late 1870's and made a historic sweep that put most outlaws behind bars or six feet under, but soon it became evident that the cat was out of the bag. Western scoundrels fled Texas like Baptists caught at a pasture beer bash, and took their bad attitudes to Oklahoma, Kansas, New Mexico and Arizona, where there was more elbow room (and no law) and life became very cheap. The obnoxious, gunslinging Texas "cowboy" became a stereotype. Most of the scum Wyatt Earp hunted down and killed were Texas "cowboys." Wild Bill Longley, John Wesley Hardin, Phil Coe, the Thompson brothers, Temple Houston, Johnny Ringo, John Selman and many more of their kind took the new science of "six-shooterology" to all parts of the West.

And the advent of the handgun facilitated a bizarre and random equation, the chain killing.

Henry McCarty AKA William Bonney AKA "Billy the Kid" was one link in an extraordinary chain killing...

When the West was young, men had no pattern to follow, about when or how to use the new and deadly tool. The "Six Shooter" or "Peacemaker" became a law unto itself. A strange code formed out of convenience and the lack of effective local Law Enforcement. "Self defense" was the oft claimed excuse for snuffing out another life, regardless of the evidence. Murder became common as did bearing false witness. And a man who routinely killed another with a gun, who "lived by the sword," as Jesus said, would most likely "die by the sword." 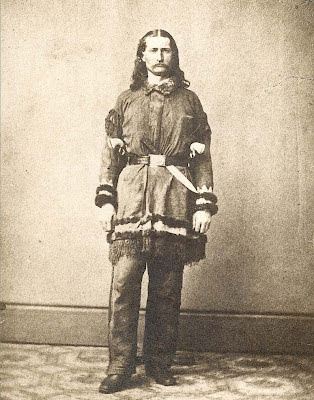 Once a scout for General Custer on the Great Plains, Wild Bill Hickok was almost at the top of a veritable pyramid of death. His claims were so outrageous it is impossible to know the numbers of links in his chain...

Wild Bill Hickok started his "law" enforcement career shooting three unarmed men who were trying to collect rent from his employer. He went on to serve as the famed and fearless marshal of Abilene, Kansas killing at least four men in the line of duty. One was the hothead Gambler Phil Coe, another his own deputy running to his aid. Hickok had claimed years before to Custer that he had killed over one hundred men in his earliest days, including rebs during the Civil War. Actual recorded killings by him were perhaps a dozen. When faced with a true killer like John Wesley Hardin, he chose to talk his way out of a situation gone bad when he tried to disarm the young gunslinger, and gun-crazed young Hardin all but begged for a gunfight. He got a complimentary shot of whiskey instead. Hardin and others noticed that Hickok rarely actually faced anybody, but shot his enemies by surprise or from positions of strategic advantage. So it was not such a shock then as it is now, when Jack McCall shot him from behind, (falsely claiming he was avenging the death of his brother). McCall was not shot, but was tried and hanged for his crime.

After John Selman (2) assassinated John Wesley Hardin (1), who had killed over 40 men, he was shot to death in an unrelated incident by fellow lawman George Scarborough (3). Death count: 45 (Could be higher, I do not known how many Selman or Scarborough might have killed) 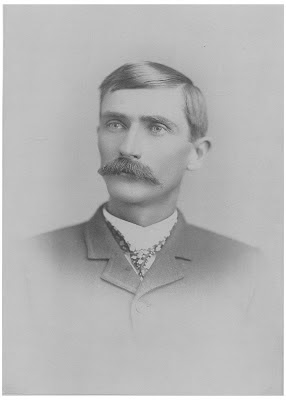 Pat Garrett was just a bartender when he met Billy the Kid, but was soon sucked into perhaps the West's most famous chain of killings... but at least he enjoyed a gap before he got his...

Leading a "posse" of deputized outlaws, William Morton (1) murdered rancher John Tunstall, who had become a threat to the local cattle baron's monopolies in Lincoln County. Billy the Kid (2) who worked for and worshipped Tunstall, killed a bunch of folks, including Morton, the number never actually proven, but "one for each year of his life" has always been repeated. After killing at least nine or ten men, he was more or less ambushed by Sheriff Pat Garrett (3), who was later gunned down by his own neighbor (4). Total dead: 14

The mother chain of them all, boasting the most players is of course the Earp's war in Arizona... where two of the three gunslinging Earps survived and did not fall victim to the curse of the chain. "Texas cowboys" had been terrorizing Tombstone when finally "Curly Bill" Brocius(2) killed Marshal White (1) in cold blood. The Earp Brothers (3,4,5) took out some of these cattle rustling punks (AKA "the Cowboys"), Billy Clanton and the McLaury brothers (6,7,8), with the help of Doc Holliday(9), who killed at least one of the McLaurys. Their deaths were somewhat avenged when somebody (probably Pete Spence (10)(not a link), Frank Stilwell(11) and "a Mexican woodcutter" called Indian Charlie(12) assassinated Morgan Earp. Wyatt Earp (3b) went on a one-man crusade, and without a peace officer's commission, proceeded to exterminate Frank Stilwell, "Indian Charlie," (the Mexican woodcutter implicated in Morgan's death), and if Wyatt's wife can be believed, "Curly Bill" Brocius and Johnny Ringo (13) as well. Known deathcount of one chain: 9, with four surviors (Three of the four from the Earp faction).

There are more of these death chains, I call them chain killings, because they remind me of the old chain-letters you used to get, where you got unwanted correspondence from sombody wanting you to pass the damn thing on to others, with all kinds of veiled threats if you failed to do so. All you had to do was to forget it, but it haunted you either way.

Posted by Russell Cushman at 12:43 AM