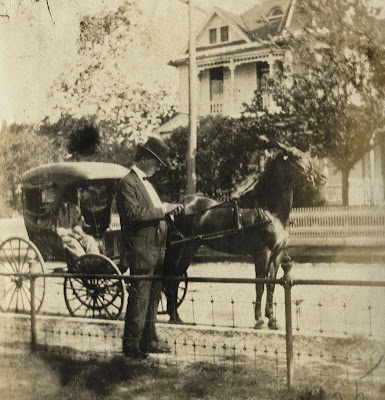 This series is dedicated to my great, great uncle, Dr. Russell Caffery of San Antonio, for whom I was named.

At the beginning of this series on Grimes County doctors, I asked the question, why so many doctors? It is a known fact that early Texas was a wide open, dangerous land, and many communities suffered from lack of access to proper medicine. They suffered even more for lack of roads, food and protection from the elements and Indians. The doctors I have already mentioned came here in spite of these deficiencies. Even then, to have had three doctors within buggy riding distance was a real luxury. From what I can gather, in the very early times, most of the doctoring was done by Dr. Neblett, as the other two were almost career politicians.

As the steamboats made their way up the Brazos and then the railroad arrived, so came even more men of medicine. This second wave of physicians were young men, attracted to the frontier, and yet pragmatic. You had to plant your base of operations where you could get medical supplies. Washington on the Brazos had been the Capital of Texas, and was in the center of activity. Right before the Civil War, Navasota was the end of the line for the Houston & Texas Central Railroad. It was the only inland railroad into the heart of the plantation region, where most people lived. And as this center for commerce grew, the population grew with it, albeit quite transient. Still, Navasota had an almost unexplainable attraction; at a time when the larger City of Waco bragged of having around ten physicians, Navasota had seven, and several more in reserve. There is no doubt that there was an incredible concentration of some of Texas’ most educated and useful men, right here, from the very beginning. When the Yellow Fever scourge arrived, it found at least fifteen doctors here to engage with it. When you consider the year, and the state of the medical profession in Texas then, it could only be that God Himself had brought this dream team to do battle with this devastating disease... and devastating it was...

Some information here comes from The Medicine Man in Texas and Dr. Andrew Robert Kilpatrick, who wrote a history of early Navasota and much of what I write here draws from his memory…

Excerpts from: A Brief sketch of Navasota, Texas prepared by Andrew Robert Kilpatrick:

“In early times, the practice was done by physicians over in Washington. The first resident physicians to practice here were Drs. Armitage, Mcfall, and Alexander Waugh, all of whom came in late 1859, or early 1860. Dr. David A. Jameson came about the same time. Dr. Pryor H. Smith came about 1861. Dr. Joseph N. Baylor came about 1864.”

By 1867 many more had come, and just in time, for when death came riding on a dark horse… and bringing with it "three months of woe..."

“In 1867, Navasota seemed to be in a state of healthy growth and prosperity: trade was quite large and brisk. Numbers of buildings had been erected and many more projected. Our population was pleasing. Early in the summer the physicians encountered many cases of severe fever, some of which proved fatal, showing symptoms of yellow fever. The fatal disease showed itself in some of the northern seacoast towns; it soon reached Galveston and Houston and in August it showed itself here. In the month of August, 1867 there were 15 deaths, all white but two. In September there were 119 deaths, only 14 of whom were colored; the other 105 were whites. Nearly every one of the colored dying were mulattoes; pure blacks seldom died. In October there were 39 deaths, of whom 5 were colored. In November there were only three deaths.

The panic created by the epidemic was equal to any made by an invading army. Out of the resident population of over three thousand, there were only a thousand two hundred or a thousand three hundred who remained in the city, nearly every one of whom had the fever. Many of those who left the city died where they fled and scores of the survivors never returned, owing to the dread they had of the fever. It completely revolutionized the City and prostrated it more than the four-year war had done. Scores of persons in the Country and in the neighboring towns who had fully determined to move here and settle were deterred from doing so and for many months several houses in town were vacant.

The Mayor, W. E. Jones, left the City precipitately, and all was in the most utter confusion. Every carriage, wagon, or conveyance of any kind was brought in to use to haul people and their effects. The weather was rainy and many more were killed by the exposure. The alarm spread in the country, and the country people dreaded to hold intercourse with the refugees... Navasota was like a city in the state of siege. The cars [railroad] continued to run but so many merchants had fled that provisions soon became scarce and dear. Scarcely anything could be procured from the country, and soon all kinds of eatables ran up to fabulous prices, and the same spirit of speculation prevailed that had existed during the war.

Nurses were hard to be procured and they charged very high for their services. Five dollars a day and ten dollars a night was demanded, and sometimes paid; but most of the persons who had remained in town were poor, so they were unable to pay. Ignorant nurses caused many deaths.

R. H. Geisel took a very active part in helping the sick and convalescent, and burying the dead. He assumed the duties of the Mayor, as far as he could, and his memory should be cherished by us for his self sacrifice and his prompt and constant effort to help the sick and suffering. Day and night during the entire three months of woe, he seemed to be everywhere. Sometimes he went to the country to minister to the sick. He died the third day of January, 1873 at the age of 39 years. In justice to him the people should rear a monument over his grave.”

Kilpatrick also counted that there were many other heroes in those times, especially amongst the physicians. Out of the 176 known deaths, six were physicians working tirelessly to save the others. Drs. Beasseley, J. Hamilton Jones, Paul Smith, A. Campbell, J. W. Russell, and Dr. Pryor H. Smith, all perished in the battle with this merciless disease.
Posted by Russell Cushman at 12:39 PM