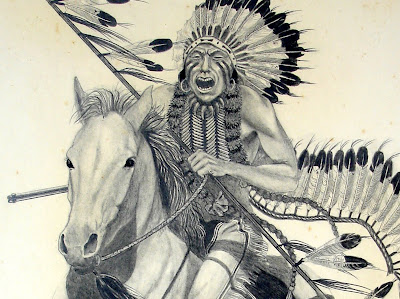 This is my artist's conception illustrating what a wide-eyed cavalryman described the night he and his bunkies attacked the King of the Southern Plains. 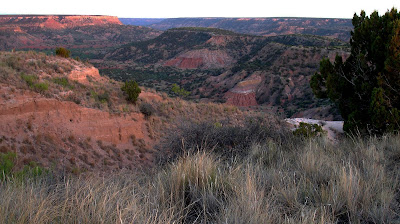 Who knows how many centuries the Comanches had used this gaping hole in the earth in far northwest Texas to hide from their pursuers?

In my younger days I wanted to be a western artist, and I especially loved drawing and painting Native Americans... and my favorite Indians were Comanches.

They were from Texas, and they had as titular head of their nation, a very unusual, very extraordinary man. A man we know as Quanah Parker, born to a captive white woman, who became the greatest Comanche War Chief, at the very end of the "wild Indian," Wild West era. His mother, Cynthia Ann Parker, had been captured by Indians where her famly had established a frontier outpost on the farthest reaches of the Navasota River, in east Texas. Several of her family were killed and little Cynthia was traded around until she was far from home, never to be rescued until she was a grown woman. Quanah was just one of the offspring from the union between Cynthia and Chief Peta Nokona, who ruled and raided the far west Texas plains. Named "fragrance," or stink! as some would translate it, the young halfbreed prince had seen very few white people besides his mother, until he was of fighting age, and he faced them heroically in battle.

As a young war chief, he led hundreds of Comanches and Kiowas and Cheyennes in a seige at Adobe Walls, a trading post in the far northern Texas panhandle, where he showed extraordinary bravery and confidence against the buffalo hunters within the walls. But his people were outgunned and many were killed, and Quanah learned that day that he had to be better, stronger, smarter than this enemy to match him. That may have been when he began to study the white man, and that led to his someday being a ruler in their world as well.

But when the rest of his people gave in and went willingly to the Reservation in Oklahoma, Quanah held out, and spit on the idea of losing his freedom. He was the last wild king of the southern plains. The soldiers hunted him month after month and could not find him... Ranald Mackenzie finally ran him down, finding his secret hiding place... a giant hole in the earth. Today we call it Palo Duro Canyon. I have always found the place to be inspiring, even mystical. There are so many footprints and echoes in the canyon, that speak of the Conquistadores, Quanah, Goodnight and his herds. I always find it hard to leave.

And Quanah did not want to leave either, and fought for his life, and gave amazing resistance. He and a few warriors managed to slip from the Army's grasp. Then finally, after weeks of flight, beaten and hungry, his small group gave in and joined their kinsmen at the reservation. And in most cases, that was the end of the story.

But not Quanah. Quanah contacted his white relatives in Texas. He was no longer treated like a ferocious enemy, but a celebrity. The Governor wrote him a letter giving him passage anywhere he wanted to go. When he found the Parker's, his cousins, he wanted a picture of his mother, then deceased. [Ironically, she was "rescued" and his father killed, by another of my top ten, Texas Ranger Sul Ross] Later the Chief proudly, sentimentally posed with her picture in his home in Oklahoma. Quanah Parker was determined to bridge himself into his new world. He learned some English, and studied the white man's ways. He amassed a fortune on any man's terms. He had many wives, and many children and grandchildren. Amazingly, and only in America, where we nurture our former enemies, authorities saw in him the qualities of leadership useful to any culture.

Quanah Parker was appointed as District Court Judge. He built a massive mansion with many rooms, with giant stars on the roof. He served in this capacity as all powerful judge without fanfare, until somebody noticed... he was a polygamist. When told he had to obey the LAW, and downsize, and send the rest packing.. he pointed to his harem of sad-eyed lovelies and told the authorities... "You tell 'em!"

Never-the-less, he put up tipis in the backyard, for all but Choney, his foremost wife.

When President Teddy Roosevelt and his entourage wanted to go wolf hunting, it was not considered complete without Quanah to ride along. They met at the train station where Roosevelt complimented the Chief on his beautiful daughters who stood proudly behind him. Someone corrected the President... (Ahem) these were not his daughters...

Roosevelt howled, and complimented him again, how did an old man like him keep up with such young wives?

Quanah Parker lived and died, still king of the southern plains, Chief of two worlds, in any man's estimation. And the only man I know of to have ever risen as high as you could go, in two opposing cultures.

That's what makes him one of my "Top Ten in Texas." You can read about Cabeza de Vaca, Frank Hamer, Sam Houston, Michael Murphy, Joe Tex, and Sul Ross in other articles in this blog. I am proud to put Quanah on that list.

There will be more, floating down the Navasota Current.
Posted by Russell Cushman at 11:05 AM