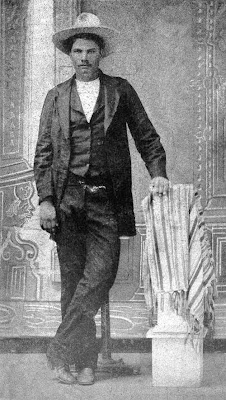 As I have said, the 1958 biography Diamond Six has a great deal concerning our local history that I have never heard, and I thought this one more blog would be appropriate to show you an example.

According to the author, John Wesley Hardin made at least one undetected escape from the Huntsville Prison while serving as a trusty. A trusty was not a trustee. He was a prisoner who was thought to be trusted if you gave him certain… liberties and privileges. Hardin was in the Huntsville State Prison for killing a bunch of men, especially a Texas lawman.

According to the account in William Fielding Smith’s book, in the spring of ’85, half a dozen rustlers attacked the Diamond 6 Ranch, stole all the cows and killed several of Wesley Smith’s old and reliable hands, ones he had served in the Texas Rangers and the Confederacy with. This suddenly makes the event sort of hard to lie about. Those deaths can be researched. Anyway, Smith and his men hunted down the killers and hung them all, Western Justice style, except for the one with a shotgun who was assumed to have killed an old crony ironically named “Dude” Justice. The shotgunner was forced into a draw and he was shot dead by Wesley Smith, in some kind of attempt at retribution.

Later John Wesley Hardin wrote Smith and claimed two of the men were his cousins and even though he was in prison, he intended to kill Smith for hanging his relatives.

Then one evening in 1886, right after Smith had been elected as sheriff, Hardin showed up at the ranch in Willis, ready to make good on his promise. But he caught Smith without his gun, and would not shoot him unarmed. After more threats were made, Hardin and his companion left, only to be chased by two young eager beavers, Smith’s son ”Bubba” and a buddy who would one day be another prominent Montgomery County lawman… Mabin Anderson. They killed Hardin’s second, but Hardin escaped.

So the story goes…

Then, Sheriff Wesley Smith tracked Hardin to a Post Office in a place called “Esperanza,” just south of Huntsville, perhaps somewhere near Stubblefield Lake, where they found him wounded from the scrape at Diamond 6. Sheriff Smith suspected he was wounded and had brought along a doctor. Hardin, desperate to keep his trusty status and get out of prison soon, made apologies and swore he was not at the rustling venture where so many Diamond 6 men had been murdered. He admitted that he had always had a hard attitude towards Smith because of one of his Diamond 6 cowboys, who had beaten him in a gunfight in Willis years before. Perhaps not coincidentally, that gunman, Duane Murchison, had been savagely murdered by the rustlers. Smith cited Ranger Ben McCulloch as the reason he believed Hardin’s testimony.

McCulloch had said that most of Hardin’s killings were understandable, the necessary or forgivable shooting of carpetbaggers, scalawags, negroes and Reconstruction era Police. The two were birds of a feather. They patched him up, not to escort him to authorities, but to send him on with blessings… !!!

In fact Hardin enjoyed the sincere blessings of many Texans. Sheriff Wesley Smith encouraged the outlaw to finish his Law studies and was sure he would make a fine attorney some day. And unlike all other deadly challengers before, he buried the hatchet with Hardin. And my sympathy for him as well. If this yarn is true, it is the final act of an embarrassing enigma of State and local history; The most deadly man in Texas, unknown, absolves the most famous killer from Texas, because they both fancy themselves as... Southern cavaliers.

It appears that there was a lot of popular support for Hardin, regardless of his crazy, murderous behavior, and the State fully intended to let him out of prison, because he was really "one of us." Hardin's killing spree was, in the end pardoned, yet he really deserved life imprisonment, if not hanging by the neck until dead. Instead, he soon went to El Paso and became a corrupt gambler and lawyer, until some other nut put a bullet in his brain.

The author’s final sentence claims that Sheriff Wesley Smith was justified in all his actions… all those battles and over sixty killings, whether they were legal or not. And that was the acceptable spin for Texas Democrats in 1888 and 1958!

And come to think of it, they have not changed…
Posted by Russell Cushman at 10:44 PM