It all started with this guy... 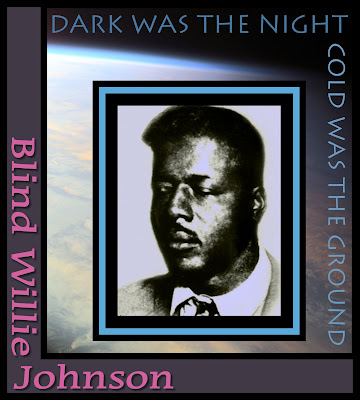 As best as I can tell, this blind gospel singer was the first nationally known recording artist to bring the Texas blues tradition to Navasota...

Born in 1897 in Pendleton, Texas, Blind Willie Johnson sang his Blues-styled gospel songs on the streets of Navasota and other Brazos Valley towns for dimes. Mance Lipscomb remembered his visits here, when he would ask Mance to tune his guitar for him. Based in Marlin, Johnson recorded numerous times for Columbia beginning in 1927, first in Dallas, then New Orleans and Atlanta, and often with the sweet back up vocals of his wife Willie (Harris) Johnson, who finally settled down in Marlin to raise their only child.

Johnson remarried, the next time to Angeline Robinson, sister of blues master L. C. “Good Rockin” Robinson, of Somerville. He is said to have toured with Willie McTell, another blind bluesman, who also went on to become one of the most famous blues men in America. Mance told how Willie and another blind musician (whose name he could not recall), walked around town arm in arm, fearlessly crossing the muddy streets of Navasota as they slowly threaded their way amongst the horses and buggies.

Using a pocket knife or bottleneck, Blind Willie Johnson was one of the early developers of the slide guitar sound. Today his music enjoys cult status, and has inspired generations of guitarists, like Bob Dylan and Eric Clapton, who has recorded his songs. One of Mance’s best songs was a Blind Willie classic, also covered by Clapton, called “Motherless children have a hard time.” This song actually told of Willie’s unfortunate loss of his mother when just a toddler.

Johnson never enjoyed a financial reward from his music, which was so unusual that most American audiences ignored it. He had a novel affectation of changing voices in the middle of a song, escalating from a rugged tenor to an unsettling false bass that made a good impersonation of a demoniac. Legend has it that he so frightened authorities and the audience with his wild performance of “If I had my way, I’d tear this building down” that he was hauled to jail in New Orleans for inciting a riot.

His last years were spent preaching, but Blind Willie died in poverty and squalor in Beaumont, Texas in 1945. Only recently have the folks in Beaumont put up a historical marker celebrating this world-famous, yet impoverished musician. Ironically, today collectors will pay over $200.00 for one of his original 78 rpm records. And Willie was given a special status among his peers when his song "Dark Was The Night, Cold Was The Ground," was included on a CD of "essential music," made of gold and placed in the Voyager spacecraft to take our World's greatest music into the farthest reaches of man.
Posted by Russell Cushman at 8:50 PM