Great songs are always in Season. 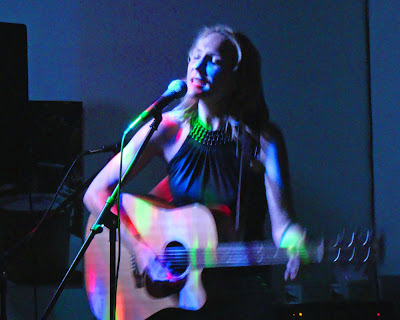 Season Ammons came to play. It was Friday night, her husband was watching the kids back at the house, and she would not be denied. Whether six or sixty, she was going to give this lucky Navasota audience an art moment as authentic as the coolest coffee bar in San Francisco. An elite but select group sat in near reverence as she delivered up one soulful original after another. The songs, many of them refreshingly honest, were inspired by some facet of her life, or even some of her bravest fantasies. They sounded intelligent, gutsy, even sensual, but Season stood and delivered them effortlessly as if they were a casual conversation.

Like her songs, Season is 100% original, and a very decent guitar picker, and I cannot help but draw some comparisons so you can appreciate your own need to hear her perform. Try if you can, to imagine a voice as tough and yet womanly as Tanya Tucker, as edgy and sophisticated, and at times as jazzy as Billie Holliday, but as relevant as today’s mail. And then that voice being poured like warm honey all over you. In the end, the only thing missing from the moment were CD’s made available at the door, to run those sweet, sensitive, fearless vocals by, one more time, to make sure I heard what I heard. Many of her songs have such a familiar, powerful ring, your brain instinctively tells you these “ought to be classics someday.” Perhaps not being able to satisfy that sudden personal need to acquire a recording of her impressive quiver of songs, and take the music home, makes the performance so much more a treasure.

So Season came to play and to give her all, and own the crowd, and she did. Someday, if there is justice in art, it will be a larger crowd in a major city worthy of her important talent. The Corner Café in Navasota will just be another little place where she humbly honed her performing skills, before the inevitable deservedly happens. Yes, you could say we were smitten. Anyone who enjoys hearing good songs, passionately sung by their own writers, will want her to do what she comes to do, and to just keep on playing.
Posted by Russell Cushman at 10:54 AM

She was all you said and more. The Corner Cafe' will always a place she can play.