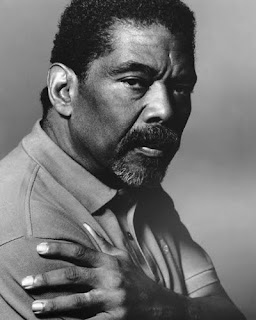 Alvin Ailey was born in Rogers, Texas in 1931. Lula, his mother remembered, “… he got busy as soon as he was born.” Determined to carry him everywhere since he showed reluctance to walk, after 18 months his unusual size made her finally set him down to walk on his own. In a telltale instant, he spun like a top and did a couple of little flips. He shrugged off her surprise and claimed his feet had never been allowed to touch the ground!

Those feet were to cover many miles with her, and ultimately dance all over the world. He came with his mother to Navasota in 1936 at age 5, where she had answered an advertisement looking for cooks to prepare food for Texas highway workers. She often worked in the cotton patch, and he grew up in the fields, picking flowers, prancing from furrow to furrow, and attending school in Navasota where he showed an interest in art. He later recalled these formative years to be the happiest times of his life.

Life in rural Texas was very hard for black farm workers. Each day was a struggle against poverty, racism, unmerciful weather, and depression. Alvin was raised in a family where hope was kept alive by Faith learned at the local church. That hope led them to better job opportunities in California in 1942, where he discovered his lifelong passion: Dance. As a teen in Los Angeles, he studied under Lester Horton, and began to emerge with a style all his own. By 1954 he was in New York, ready to make a lasting mark on the world of Dance. In 1958 he and his cronies were unveiled as “The Alvin Ailey American Dance Theatre,” at the 92nd Street Young Men’s Hebrew Association.

In the 60’s he led what he called “station wagon tours” all over the northeast. The “AAADT” was widely acclaimed as they performed his groundbreaking show called “Blues Suite,” which mastered in dance what Alvin had grown up seeing and hearing in the cotton fields, a bodily interpretation of blues. And that was just the beginning.

Today he is remembered as a daring iconoclast, a breathtaking dancer, an innovative choreographer and an entertainment visionary. He died in 1989 of blood dyscrasia, leaving his legend in mid-birth. But the name Alvin Ailey will far outlive the struggles and talents that took him to the top. Every year on New Year’s Eve, it is at his dance theater that the high society of New York meets to welcome in the New Year. His very name has become synonymous with personal achievement, hope and new beginnings. The contribution he made to American dance and entertainment as a whole may never be quantified.
Posted by Russell Cushman at 2:33 PM