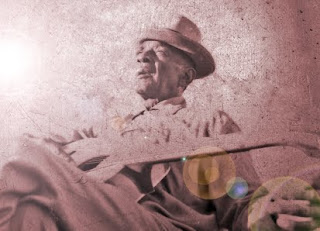 John Lockett glided into the Navasota Bluesfest, decked out in a dapper bone-colored suit and fedora, shades, and a face that looked like, well, Mance Lipscomb. I took one glance and surmised he was a writer for a Houston R&B magazine, or something like that. I never imagined I would find out.

Later Sheriff Sowell introduced us. There we were, three of us, two of us just history lovers, and one a walking blues history interactive center. “Mance was my father,” he began, and I don’t remember his exact words after that, as I went into fan shock. The name alone had me perplexed, but I was soon to understand. John explained that he was an “outside” child as they used to say, and Mance brought him to meet Elnora and live with them when he was six. After the shock wore off, she never treated him any different than the other children. John often played the drums when his father performed, and other family members occasionally accompanied Mance as well, as Mance had done for his father.

“I was the business minded son, and I was the one who read his contracts for him…” John explained. “One night I’ll never forget, we had played for several hours, and I was gettin’ tired. I knew that the contract said that he would play for so many hours and get paid for those hours. But he just kept on playin’, and about an hour had passed and I said ‘Papa, you keep on playin’, but we were through around ten o’clock, and all this you’re doin’, you ain’t gettin’ paid!’ He said, ‘There’s still people dancin,’ so we’ll keep on playin.’ And I said, ‘Well I don’t know about you, but I’m through!’ and I put down the drumsticks. .. But he kept on playin’ all by himself, and played until the people quit dancin’. Sometimes he would play all night long like that. He didn’t care what the contract said…”

Lockett admitted that his father was a hard act to follow, and his lifelong legacy had been an inspiration. He made his own career in the U. S. Army, serving for 23 years. After he graduated from college, he became a history instructor at Houston Community College, where he still works in the registrar’s office. His father’s attitude of sacrifice and service to his community was impressed on him early, and he never forgot it. His honesty and integrity were without peer. “I think about what he did,” he said, “bringing me to his wife like that, and telling her, ‘This is my son and I could never deny that he is mine,’ that took a lot of guts. I don’t know, if that was me, whether I could’ve done that!” John humbly smiled with a twinkle in his eye. It was a faraway look of respect and wonder.

For a moment, as I looked in that face, with Mance written all over it, and studied his warm eyes, I thought I could see what he was looking at.
Posted by Russell Cushman at 9:20 AM